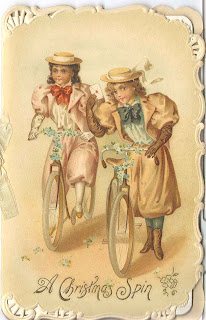 Posted by Unknown at 3:51 PM No comments:


One of the things about collecting old bicycles that keeps my interest is solving mysteries. I often come across bicycle frames and parts that I do not know much about. Discovering when and where, and who made bicycles is one of the fun things in the hobby. How did a bike come from the builder? How was it  painted? With what parts did it originally come? These are some of the first questions. Then the life of the bike. Who owned it? How many different people owned it? Where was it ridden? If it could tell its own story, what would it say?
I recently purchased a frame that I know very little about. I think it is from the mid 1890s. I was told that it is a track frame. It has a slightly wider than normal, 1/4 inch block chain.  The chain is what caught my interest, because I have an 1893 Columbia Century that needs a wider than normal chain, and I've never found one.
Now that I have this new frame with the 1/4" chain, I have checked to see if it fits on the Century and it is not wide enough. I think that the century needs a 3/8 inch wide chain. I do also have an 1890s  Columbus tandem that needs a 1/4" chain, so maybe the chain will go on the tandem. The fork that came with the bike is obviously not the original, because it is too long. I could make it work, and it does look appropriate. But before cutting it down, I would like to know what the fork came off of and what the correct fork for this frame looks like. The fork is similar to the one on my 1900 Crescent Model 31. Hopefully someone who reads this will be able to answer some of the questions. 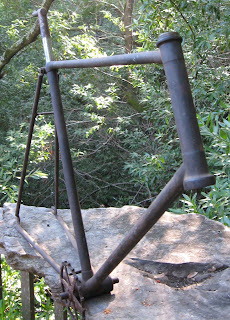 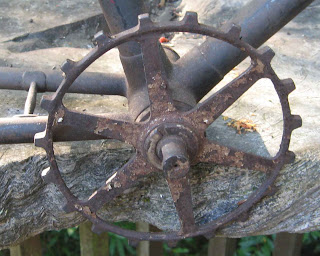 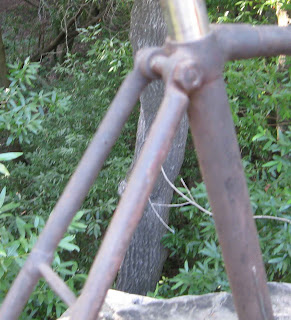 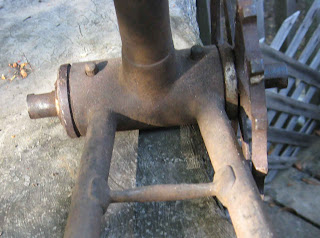 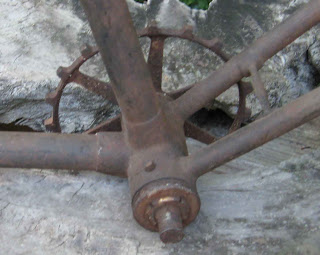